The ‘Netscape Moment,’ 21 years on

Today marks the 21st anniversary of the “Netscape Moment” of 1995, the day when a Silicon Valley startup’s eye-popping market debut illuminated the World Wide Web for millions of people who otherwise were vaguely familiar with its potential and promise.

The initial public offering of shares of Netscape Communications Corporation stimulated the dot.com boom of the late 1990s and enabled Netscape to help establish what one writer called “the technological, social, and financial tone of the Internet age.”

Netscape was the maker of the breakthrough Web browser, Navigator. By summer 1995, Navigator commanded more than 70 percent of the emergent browser market. The company had yet to turn a profit, but on August 9, 1995, Netscape put 5 million shares of its stock for sale on NASDAQ, priced at $28 per share.

For nearly two hours that morning, an order imbalance kept the company’s shares from being traded: Demand was that strong. Finally, the stock opened — at $71 per share. It climbed as high as $74.75 a share before settling at day’s end to $58.25.

The Wall Street Journal noted that it had taken General Dynamics 43 years to become a corporation worth $2.7 billion in the stock market. It had taken Netscape “about a minute.”

The IPO made millions for the company’s founders.

The Netscape shares of Jim Clark, already wealthy from having founded Silicon Graphics, was worth about $566 million at the close of trading on August 9. Netscape’s other founder, 24-year-old Marc Andreessen, had a stake valued at nearly $59 million.

Netscape’s IPO “introduced the entire country to Silicon Valley,” Mike Cassidy wrote 10 years later in retrospective column for the San Jose Mercury News. “It was the company from central casting. From the beginning, Netscape had all the elements to tell the story of the valley’s Internet era: The young technologist. Explosive growth. A product that really could change the world.”

Netscape was the Internet company from central casting. It had a poetic, pitch-perfect name, and it exuded panache at a time when it was OK to swagger and be brash about the Web. The company’s IPO was nothing if not brash, signaling as it did that the Web could be a place to make fortunes.

And Netscape Navigator was the gateway to the early Web for millions of people. 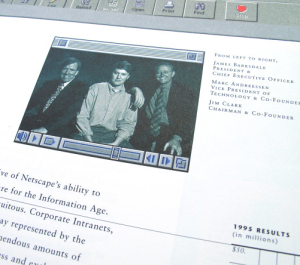 From Netscape’s annual report for 1995; Andreessen is at center, Clark at right

The central and perhaps most improbable character of the Internet startup from central casting was Andreessen, a voluble guy with an agile mind who, back then, was full of amusing quirks and habits. He was less than two years out of college in 1995 and he had not shed all the trappings and eccentricities of undergraduate life, as I note in my latest book, 1995: The Year the Future Began. He worked late and got up late. His taste in clothes, it was said, ran to “frat-party ready.”

Andreessen was, it seemed, the embodiment of Internet-geek-as-luminary. As Nick Gillespie, the brilliant editor of Reason.com, has noted, “If Jim Morrison was the ultimate, first real rock star, Andreessen was the first real Web star.”

At the end of 1995, Newsweek magazine referred to Andreessen, now a prominent venture capitalist in Silicon Valley, as “the über-super-wunder whiz kid of cyberspace” whose “programming savvy has turned the Internet’s World Wide Web into an electronic playground that is revolutionizing information technology and the ever-growing global network of computers.”

Andreessen could be provocatively colorful. He dismissed the technical qualities of Microsoft’s Windows operating software. He likened the conduct of representatives of Microsoft Corporation to “a visit by Don Corleone” of The Godfather films.

“I expected to find a bloody computer monitor in my bed the next day,” he said of a meeting with Microsoft at Netscape’s headquarters in June 1995.

At that meeting, Microsoft delivered what Netscape regarded as a heavy-handed threat: Divvy up the market for Web browsers or face the prospect of annihilation.

Microsoft was then developing a Web browser, the anemic first version of Internet Explorer, which the company bundled with some versions of its Windows 95 operating software. Windows 95 was released in late August 1995 amid much hype and hoopla.

By year’s end 1995, Netscape was locked in a “browser war” with Microsoft.

It was a death struggle for Netscape, as later versions of Internet Explorer were technically as good as Netscape’s subsequent editions of Navigator.

Netscape steadily lost share of the browser market and in November 1998, it was acquired by AOL.com in a deal eventually worth $10 billion. The acquisition was completed in 1999.

And therein lies another reason why Netscape deserves to be remembered, years after it burst into prominence: Netscape can be regarded  as an early victim of the Web’s ruthlessness, crushed by Microsoft and the predatory strategies it employed in the “browser war” — strategies later found to be illegal restraints of trade.

But 21 years ago today, Netscape and its IPO “brought the Web into popular consciousness,” as I write in 1995. And its browser, I add, “signaled the centrality of the Web in the digital age.”

‘Such was Cronkite’s influence’