O.J. case ‘do over’: Why the ’95 trial is alive in popular consciousness

For Marcia Clark, the prosecutor who tried O.J. Simpson for double murder in 1995, and lost, The Fix series on ABC is something of a wishful do-over. 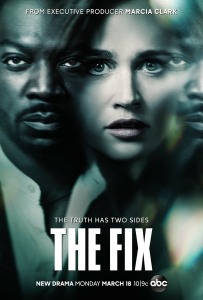 More broadly the series offers a fresh reminder that the Simpson trial — which unfolded in a Los Angeles courtroom to astonishing plot twists and became known as the “Trial of the Century” — exerts a hold on popular consciousness, 24 years on.

For Clark, the Simpson case, ended in steep disappointment after being outmaneuvered by the defense legal team, which turned the trial into a referendum on race relations and police misconduct in Los Angeles.

The defense argued without much evidence that corrupt police officers had framed Simpson, a black former football star and movie actor who stood accused of fatally stabbing his former wife and her friend, both of whom were white.

Simpson’s acquittal was all but assured when one of Clark’s chief witnesses, a white police detective named Mark Fuhrman, was revealed as a perjurer who had lied about racial slurs he uttered years before.

Clark is billed as executive producer and co-writer of The Fix, the third installment of which airs tomorrow night. The opening segments of the series borrowed broadly but unmistakably from the Simpson case: A black celebrity and fading movie star named Sevvy Johnson is suspected of beating to death his white girlfriend — eight years after his acquittal in a nationally prominent trial on charges of killing his wife and her friend.

The prosecutor who lost the case is Maya Travis, a vaguely Clark-like character played by Robin Tunney. Travis reluctantly returns to Los Angeles from retirement to take on Sevvy Johnson again.

The Fix is passable TV drama, even if Tunney wears a constantly pained expression and the hulking Adewale Akinnouye-Agbaje, who plays Sevvy Johnson, doesn’t look or sound much like Simpson.

RELATED: When the country stood still: Awaiting the O.J. verdicts, 1995

More intriguing than what might be Marcia Clark’s revenge fantasy is the implicit affirmation that the Simpson case remains an intriguing and unsettled feature of American popular culture.

The case has been recalled in a 10-part miniseries, an exploitative but well-received treatment that aired a few years ago on the FX cable channel. That was followed by “O.J.: Made in America,” an overrated, five-part docu-series on ESPN. Other, lesser productions have been broadcast as well: Among them, a long ago taped interview that was aired last year on Fox and featured Simpson giving a sort of quasi-confession.

Fascination in the Simpson double-murder case is driven by much more than nostalgia for the 1990s, itself a recurring phenomenon in American popular culture. And it is propelled by more than lingering curiosity about Simpson, who in 2008 was convicted of kidnaping and armed robbery and sent to prison in Nevada for nine years.

At least part of the fascination is grounded in perverse interest about how Simpson beat the murder charges: He was accused of stabbing to death Nicole Brown Simpson and Ronald Goldman in June 1994 outside her condominium in the Brentwood section of Los Angeles. He spent millions of dollars to win acquittal, hollow and imperfect though the verdict was.

Simpson’s lawyers effectively impugned Clark’s best evidence — the traces of his DNA and that of the victims, found in blood at the crime scene, in his Ford Bronco, and at his mansion in Brentwood.

DNA was seemed to be persuasive evidence in a case that produced no witnesses to the slayings, no murder weapon, no confession of guilt. That evidence, as I noted in my book, 1995: The Year the Future Began, “implicated Simpson but failed to convict him.

Simpson was arrogant — sometimes flamboyantly so. On the day he was acquitted in October 1995, Simpson issued a statement pledging to “pursue as my primary goal in life the killer or killers who slaughtered Nicole and Mr. Goldman. They are out there somewhere.”

It was a gratuitous vow, one that Simpson surely never intended to redeem.

That night, behind the high walls protecting his mansion, friends and family gathered to drink champagne and celebrate the acquittal — an unseemly close to the months-long spectacle that had been his trial.

Even now, the Simpson case remains a standard against which other high-profile murder trials are measured — and inevitably found wanting.

What other case in recent years has come close to matching the strange attraction of the Simpson trial? None, really.

And certainly not The Fix.

4 comments on “O.J. case ‘do over’: Why the ’95 trial is alive in popular consciousness”

Cronkite did all that? The anchorman, the president, and the Vietnam War