Memorable moment in an exceptional year: The Netscape IPO of 1995

The year 1995 was filled with decisive turns and memorable developments; among them, the “Netscape Moment” of 25 years ago. It was an eye-popping moment in an exceptional year. On … Continue reading → 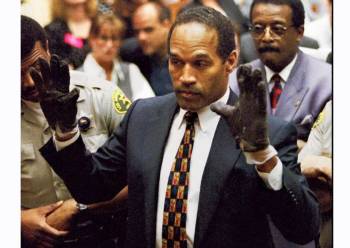 ‘Too tight’: The botched glove demonstration at O.J. ‘Trial of the Century’ in 1995

O.J. Simpson never testified at his months-long double-murder trial in 1995. But a consistent feature of the absorbing yet often-repellent case was that Simpson was never far from center stage … Continue reading →

Twenty-five years ago tomorrow, Bill Gates sent a lengthy internal memorandum to senior staff at Microsoft Corporation, declaring the internet “a tidal wave” that “changes the rules.” It was a … Continue reading →

25 years on: Remembering the OKC bombing — and how the media erred

Twenty-five years on, powerful images of the Oklahoma City bombing — the deadliest act of domestic terrorism in American history — have proved to be timeless. There’s the jagged, ruined … Continue reading →

The false equivalence of Trump and O.J. trials

Since the impeachment case against President Donald Trump sputtered to its inevitable conclusion early this month, the analogy has circulated that Trump’s acquittal should be considered akin to the popular … Continue reading →

The 25th anniversary of opening arguments in the O.J Simpson “Trial of the Century” fell last week and Court TV.com marked the occasion by launching a retrospective series about the … Continue reading →

Twenty-five years have passed since the dawning of 1995 and the year’s enduring significance is more apparent than ever. Nineteen-ninety-five was a decisive time defined by watershed moments in new … Continue reading →

The impeachment case against President Donald Trump seems ominous in its outsize claims but is still quite thin on evidence. That, of course, hasn’t prevented Trump’s foes from pronouncing him … Continue reading →

Nobel Prize: Recognizing the 1995 discovery of the first exoplanet

Twenty-four years ago, an unassuming Swiss astrophysicist named Michel Mayor took the floor at a conference in Florence, Italy, to announce the discovery of an exoplanet — a planet orbiting … Continue reading →

Cronkite did all that? The anchorman, the president, and the Vietnam War