25 years on: Remembering the OKC bombing — and how the media erred

Twenty-five years on, powerful images of the Oklahoma City bombing — the deadliest act of domestic terrorism in American history — have proved to be timeless.

There’s the jagged, ruined face of the Alfred P. Murrah federal building, the target of the indiscriminate attack that killed 168 people. There’s the perp walk of Timothy McVeigh, the remorseless mastermind, outfitted in an orange jumpsuit as he was led into federal custody.

There’s the glowering likeness of “John Doe No. 2,” the phantom accomplice (see sketch nearby) who sprang to life from what surely were confused recollections of witnesses.

Nearly as memorable are the pronounced media errors that marred coverage of the bombing of April 19, 1995, when McVeigh’s truck bomb dealt death and terror to a welcoming, unassuming city deep in America’s heartland.

Recalling media error at Oklahoma City is certainly appropriate, given the 25th anniversary and given the more recent failed narratives that mainstream media pushed so vigorously. Notable among them was Donald Trump’s supposed collusion with Russia to rig the 2016 presidential election, a specious storyline for which Pulitzer Prizes were given to the New York Times and Washington Post.

Invariably, the first hours of any major disaster are filled with rumor and confusion, complicating news coverage and making it prone to error.

But reporting lapses at Oklahoma City 25 years ago were more profound and troubling than routine mistakes. They anticipated and set a tone for extravagant conspiracy theories that have flourished about the bombing.

They effectively laid the ground for enduring suspicions that the attack was the work of a shadowy international conspiracy which, in one wildly inventive telling, included Ramzi Yousef, mastermind of the 1993 World Trade Center bombing that killed six people and injured many more.

In the aftermath of the shattering attack on the Murrah building, the news media pushed hard on speculation that the bombing had been carried out by Middle Eastern terrorists.

Connie Chung, then in her last days as co-anchor of the CBS Evening News, gave prominence to such notions, declaring in a report from Oklahoma City on the evening of the bombing that a “U.S. government source has told CBS News” that the attack “has Middle East terrorism written all over it.”

On ABC News, the national security correspondent, John McWethy, reported that “if you talk to intelligence sources and to law enforcement officials, they all say . . . that this particular bombing probably has roots in the Middle East.”

Two days after the bombing, syndicated columnist Georgie Anne Geyer wrote “the indisputable fact is that it has every single earmark of the Islamic car-bombers of the Middle East.” Another syndicated columnist, Sandy Grady, asserted: “Experts speculate the Oklahoma City car bomb was home-built by Arabic zealots with a beef against the U.S. government.” 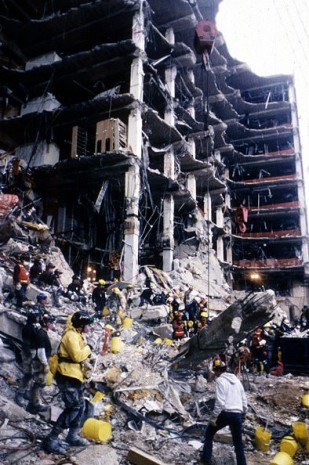 The local Daily Oklahoman said the glass and debris that littered the city’s streets in the bombing’s wake brought to mind “Bosnia or Beirut, not Oklahoma City.” The Wall Street Journal likened the Oklahoma City attack to a “Beirut-style car bombing.”

Indeed, the devastated facade of the Murrah Building resembled the U.S. embassy building in Beirut after it was bombed in April 1983.

The Guardian said sympathizers “or members of the group of Muslim extremists who followed Sheikh [Omar Abdel] Rahman must be considered the most likely suspects, because they have repeatedly threatened revenge for what they call his persecution.” Rahman, a blind Egyptian cleric who came to the United States in 1990, was tried and convicted in 1995 of plotting to blow up landmarks across New York City, including United Nations headquarters. 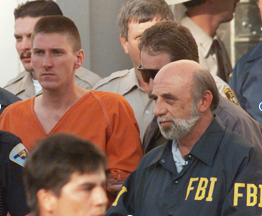 Surprise, then, ran deep when federal authorities took McVeigh into custody (see photo nearby), leading him out of the jailhouse at Perry, Oklahoma, where he had spent two days on traffic and concealed-handgun violations.

An Oklahoma highway patrol officer had stopped and arrested McVeigh about 90 minutes after the bombing because McVeigh’s car lacked a registration tag. By the time federal agents linked him to the bombing, McVeigh was about to released on bail from the jail in Perry.

With McVeigh in federal custody, suspicions of a Middle East connection were supplanted by speculation that the bombing was the work of a conspiracy of right-wing militia extremists. The New York Times pushed that angle, declaring in a front-page article four days after the attack:

“Federal investigators said they believed there was a broader plot behind the bombing and were searching for evidence of a conspiracy hatched by several self-styled militiamen who oppose gun laws, income taxes and other forms of government control.”

In the 25 years since, no compelling evidence has emerged that the conspiracy was any broader than an undistinguished trio of disaffected U.S. Army veterans: McVeigh, the ringleader who was executed for his crimes in 2001; Terry Nichols, the principal accomplice who was sent to prison for life, and Michael Fortier, who helped McVeigh and knew about the bomb plot but did nothing to stop it; he served a little more than 10 years in jail.

That, I wrote in my 2015 book, 1995: The Year the Future Began, “was the likely extent of a ragtag conspiracy that brought about the Murrah Building’s destruction.”

But for many people, I noted, “it was just too ragtag, too improbable to embrace. The gravity of the attack in Oklahoma City — not unlike the assassination of President Kennedy — seemed to cry for a plot more substantial and a conspiracy more elaborate and sophisticated than misfit Army buddies angry at the federal government.” McVeigh, especially, was disturbed by the deadly confrontation near Waco, Texas, in April 1993 between federal agents and members of the Branch Davidian sect.

But McVeigh’s connections to extremist groups, including right-wing militias, were vague and distant. Tenuous at best. McVeigh nursed extreme, anti-government views but, as I noted in 1995, “never was conclusively linked to anti-government militias.” He may have been a kindred spirit, but McVeigh was neither a member nor a leader.