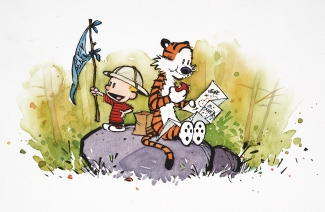 The weekend’s Wall Street Journal carried an outstanding tribute to the still-missed “Calvin and Hobbes” newspaper comic, the last original strip of which appeared at the end of 1995.

The comic was drawn by Bill Watterson and featured the hijinks of a 6-year-old named Calvin and his companion stuffed tiger, which came vigorously to life only in the boy’s company. The comic’s leave-taking on the final day of 1995 offered modest but not insignificant testimony about why 1995 was a memorable year.

In fact, the year opened with publication of the last original “Far Side” comic and closed with Calvin’s adieu.

The departures of two widely followed comics just happened to fall on the first and last days of 1995. Even so, I write in my latest book, 1995: The Year the Future Began, “they respectively anticipated and confirmed 1995 as a year of notable watersheds.”

As the Journal’s tribute-essay this weekend made clear, “Calvin and Hobbes” was inspired and entertaining on a number of levels.

The essay, written by Christopher Caldwell of the Weekly Standard magazine, described quite well the appeal and richness of “Calvin and Hobbes,” noting that the strip brought together “the richness of the imagination, the subversiveness of creativity and the irreconcilability of private yearnings and worldly reality.”

At the peak of the strip’s popularity — after a 10-year run — Watterson gave it up. He told his syndicate as the day of Calvin’s farewell approached:

“My interests have shifted, and I believe I’ve done what I can do within the constraints of daily deadlines and small panels.”

Such pressures surely would have intensified had Watterson continued drawing “Calvin and Hobbes” beyond 1995, as Caldwell’s essay pointed out. The strip, though much-missed, probably was best ended in 1995.

In the years since, the Internet has “cut a swath through the press,” Caldwell noted. “There are no longer hundreds of independent newspapers to which a cartoonist can syndicate his work.

“And today’s cultural climate might have made it more difficult for him to render a boy’s imaginative life in a realistic way. Calvin fantasizes not just about dinosaurs flying F-14s but also about shooting up his school with a tank. At one point, he tells Susie Derkins—his neighbor, rival and secret crush—’I’m sure it’s frustrating knowing that men are bigger, stronger and better at abstract thought than women.’ That these are all jokes matters little. Enforcers of taste are not known for their humor.”

A good point, that: “Enforcers of taste are not known for their humor.”

It is hard to imagine that the Calvin of 20 years ago being enthusiastically embraced, were he to be introduced in 2015. Just as the Seinfeld comedy series of the 1990s surely would encounter trouble gaining critical approval were it to debut on network television these days. (Granted, the show does live on in syndication.)

“So one feels a double nostalgia in looking back at Mr. Watterson’s cartoons,” Caldwell writes, “first for an artist who is probably the greatest his genre has produced, second for the culture he spoke from, which was in ways freer than our own.”

What came to mind in reading that passage were Bob Dole’s remarks in 1995, assailing Hollywood executives for supposedly debasing American culture, and the commencement address Russell Baker delivered that year at Connecticut College in New London.

Both were angry and annoyed assessments that offer counterpoint to Caldwell’s observation about American culture 20 years ago. Especially so Baker’s speech: The humor writer was uncharacteristically grim in lamenting what he considered to be the country’s mood in 1995.

“I have never seen a time when there were so many Americans so angry or so mean-spirited or so sour about the country as there are today,” Baker declared, adding:

“Anger has become the national habit. You see it on the sullen faces of fashion models scowling out of magazines. It pours out of the radio. Washington television hams snarl and shout at each other on television. Ordinary people abuse politicians and their wives with shockingly coarse insults. Rudeness has become an acceptable way of announcing you are sick and tired of it all and are not going to take it anymore. … The question is: why?

“Why has anger become the common response to the inevitable ups and down[s] of nation[al] life? The question is baffling not just because the American habit even in the worst of times has traditionally been mindless optimism, but also because there is so little for Americans to be angry about nowadays. . . . So what explains the fury and dyspepsia? I suspect it’s the famous American ignorance of history. People who know nothing of even the most recent past are easily gulled by slick operators who prosper by exploiting the ignorant.”

I cite Baker’s remarks not because they were necessarily on-target. Indeed, I write in 1995 that it is hard to look back and view the year as an angry moment.

Nineteen ninety-five, I write, “was neither a frivolous nor a superficial time, but real anger in the land was to emerge later, in the impeachment of Bill Clinton in 1998, in the disputed election of George Bush in 2000, and in the controversies that followed the invasion of Iraq in 2003.”

But Baker’s characterization about America’s mood in 1995 has value as a contemporaneous assessment of the culture in a watershed year.

‘Such was Cronkite’s influence’