Clinton, his portrait, and the persistent shadow of scandal

The long reach of 1995 was reconfirmed the other day in the interview a portrait artist gave to a Philadelphia tabloid.

The artist, Nelson Shanks, said in the interview that he slyly painted into his portrait of President Bill Clinton a shadowy reminder of Clinton’s sexual dalliance with Monica Lewinsky.

She was a 22-year-old White House intern when she began a relationship with Clinton in November 1995, an intermittent affair that ultimately rocked the American government and give rise to the president’s impeachment in 1998.

Shanks was quoted by the Philadelphia Daily News as saying Clinton probably is “probably the most famous liar of all time. He and his administration did some very good things, of course, but I could never get this Monica thing completely out of my mind and it is subtly incorporated in the painting.” 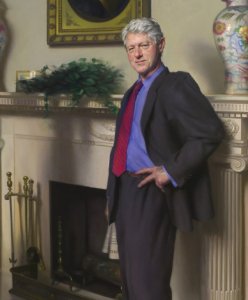 “If you look at the left-hand side of it there’s a mantle in the Oval Office and I put a shadow coming into the painting and it does two things. It actually literally represents a shadow from a blue dress that I had on a mannequin, that I had there while I was painting it, but not when he was there.

“It is also a bit of a metaphor in that it represents a shadow on the office he held, or on him.”

The portrait — in which Clinton looks faintly like a pudgy Ted Koppel — was unveiled in 2006 at the National Portrait Gallery in Washington, DC. Shanks’ comments about shadow underscore anew how unshakeable the Clinton-Lewinsky scandal has proven to be: Reminders of the affair keep returning to popular consciousness.

Nearly 20 years since the affair began, and 16 years since Clinton was acquitted by the U.S. Senate of two articles of impeachment, the scandal remains a matter of enduring, if low-level, fascination.

As I write in my latest book, 1995: The Year the Future Began, it’s as if, somehow, there’s more to know about why Clinton took the risks he did in trysting with an intern 27 years his junior.

In the past year or so, fresh reminders of the Clinton-Lewinsky scandal have made their way into the news, including the disclosures in February 2014 that at the height of the scandal, Clinton’s wife, Hillary, privately referred to Lewinsky as “a narcissistic loony toon.”

A couple of months later, Lewinsky broke a prolonged public silence and wrote in a first-person essay in Vanity Fair that she “deeply regret[s] what happened between me and President Clinton. . . . At the time — at least from my point of view — it was an authentic connection, with emotional intimacy, frequent visits, plans made, phone calls and gifts exchanged. In my early 20s, I was too young to understand the real-life consequences, and too young to see that I would be sacrificed for political expediency. . . . I would give anything to rewind the tape.”

“Sure, my boss took advantage of me, but I will always remain firm on this point: it was a consensual relationship. Any ‘abuse’ came in the aftermath, when I was made a scapegoat in order to protect his powerful position.”

That reference was to Clinton’s repeated denials of a relationship with Lewinsky. As the scandal broke in January 1998, he famously declared, wagging an index finger for emphasis, that he had never had sexual relations “with that woman, Miss Lewinsky.” He also falsely told aides that Lewinsky was a stalker who had made sexual demands of him.

In October 2014, Lewinsky gave her first public speech, at an Under 30 program in Philadelphia, a speech in which she recalled her affair with Clinton almost wistfully. She said she regretted it now, but that “at that time, it was my everything.

“That, I guess you could say, was the golden bubble part for me; the nice part. The nasty part was that it became public,” with word that independent counsel Kenneth Starr was investigating Clinton for perjury and obstruction of justice.

Clinton was impeached for perjury and obstruction in December 1998 — the first elected U.S. president to be so charged. He was acquitted by the Senate in February 1999.

And now, the sly remarks by Shanks offer another dimension as to how the scandal is remembered.

“One can think of no other presidential portrait where the artist … thought the subject was such an incredible blackguard that he saw fit to add a telltale and eternal reminder of his subject’s presidential misadventure into the portrait,” Jeffrey Lord wrote recently for the American Spectator. “It is as if Richard Nixon were painted with the Watergate [complex] in the background ….”

Lord’s point is a good one, even though Clinton survived the scandal in part because his conduct in concealing the dalliance with Lewinsky did not reach the depths of criminal behavior that characterized Nixon in Watergate.

As I write in 1995 (which includes a chapter about the Clinton-Lewinsky scandal): The president’s “falsehoods, evasions, and dishonest efforts to conceal his dalliance with Lewinsky scarcely rivaled the crimes of Watergate, a political scandal unique in the depths of wrongdoing it plumbed.

“Clinton may have been a raffish, self-centered rogue who tortured the truth and recruited aides to do the same on his behalf. But he was no vindictive, score-settling crook oozing paranoia, as Nixon was.”

Nevertheless, Clinton must be surprised by the persistent reminders of the Lewinsky affair, and by how the affair refuses to recede from collective memory, as did his other scandals and near-scandals.

Who, for example, recalls much about the Whitewater real estate scandal which, for a time in the mid-1990s, seemed to pose a pronounced threat to Clinton’s presidency? Clinton’s former business partners, James B. McDougal and his wife, Susan, were indicted in 1995 and convicted on fraud charges in 1996. But Whitewater left no lasting effects for Clinton.

Unlike the Lewinsky scandal, with its inescapable shadow.

55 comments on “Clinton, his portrait, and the persistent shadow of scandal”