Saturday marks the 20th anniversary of the successful conclusion of U.S.-brokered peace talks near Dayton, Ohio — a remarkable negotiation that was salvaged at almost the last possible moment and ended the brutal war in Bosnia in which 100,000 people were killed.

The talks not only brought a close to Europe’s bloodiest conflict since the time of the Nazis. As I point out in my latest book, 1995: The Year the Future Began, the diplomatic success at Dayton also “revived a spirit of ‘American Exceptionalism’ and launched the United States on a trajectory of increasingly forceful interventions abroad.”

For several years after Dayton, U.S. foreign policy was characterized by a sense of hubris and muscularity, the consequences of which the country is still sorting through.

The talks began November 1, 1995, at the sprawling Wright-Patterson Air Force base  just outside Dayton, and brought together the leaders of Bosnia, Croatia, and Serbia  — the warring factions in a conflict that began more than three years earlier, amid the post-Cold War breakup of the former Yugoslavia.

For nearly three weeks the talks went on, often teetering on collapse. Indeed, failure seemed assured on the morning of November 21, 1995, when the U.S. delegation, led by Richard C. Holbrooke, an assistant secretary of state, began what was to be its close-out meeting. But the Balkan leader most eager for a deal at Dayton, Serb President Slobodan Milosevic, showed up and proposed an 11th hour gambit to save the talks, which were hung up on the administrative division of Bosnian territory.

They specifically were hung up on which side would control Brcko, a strategic river town in northern Bosnia on the Croatian border. Milosevic, who had insisted that the Bosnian Serbs control the town, relented and suggested its sovereignty be decided by international arbitration.

Milosevic’s gambit, which is colorfully recounted in Derek Chollet’s book, The Road to the Dayton Accords, removed the final obstacle to a complicated peace settlement. The Croats and Bosnians agreed to international arbitration for Brcko, and the Dayton accords were initialed that afternoon. They were formally signed in Paris a few weeks later.

The deal reached at Dayton “in many ways reflected the complexities, fragility, and contradictions that define the Balkans,” I write in 1995.

“The agreement was not without serious shortcomings; its flaws were unmistakable,” I note, adding, “The fundamental tension lay in the fact that the accords established a weak central government and two semi-autonomous entities shaped by ethnicity.” 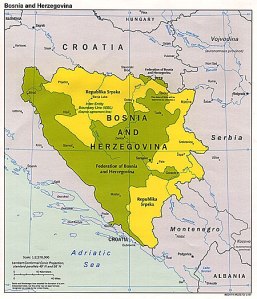 The two entities — a Muslim-Croat Federation and a Serb statelet called Republika Srpska — were granted their own governing structures, parliament, police force, and state agencies. To many critics, that arrangement “looked a lot like partition beneath the fig leaf of a weak unitary government,” I write, adding:

“Moreover, the agreement rewarded Bosnian Serb aggression. Republika Srpska controlled just under half of the territory of Bosnia; before the war, the Serbs had controlled about a third of Bosnian territory. The Dayton accords also permitted the three once-warring parties in Bosnia to retain their respective armies. One country, two entities, three armies: these, too, were hardly the ingredients of a sturdy peace.”

If the Dayton agreement ended the bloodshed in Bosnia, it did little to encourage cooperation across the country’s ethnic divisions. The peace has been fragile, almost grudging, and bitter. The agreement has become “a self-sustaining machine for producing misery,” London’s Guardian newspaper observed recently in an insightful analysis about Bosnia 20 years after the accords.

“With each passing week,” the Guardian further noted, “the prognosis for Balkan stability grows more alarming. There are even murmurs of a possible return to conflict. They seem far-fetched for now, but their persistence reflects the depth of anxiety about the future.”

But for the United States, the Dayton accords represented a clear foreign policy achievement. It was almost as if the world’s sole superpower was finally finding its stride in the post-Cold War environment.

Diplomatic success at Dayton was accompanied by the rhetoric of “American Exceptionalism” — a sentiment that has run deep in American culture and holds that the United States is a singularly virtuous force in a dangerous and troubled world. President Bill Clinton gave it voice at the White House on November 21, 1995, in announcing that the agreement had been reached.

“The central fact for us as Americans is this,” Clinton said. “Our leadership made this peace agreement possible and helped to bring an end to the senseless slaughter of so many innocent people. . . . Now American leadership, together with our allies, is needed to make this peace real and enduring.”

He was referring to his administration’s commitment to send 20,000 troops to Bosnia, as part of a NATO peacekeeping force. Dispatching U.S. military units to Bosnia was not popular, domestically, but it was a gamble that Clinton won: No American was killed by hostile fire during the nine-year deployment.

Diplomatic success at Dayton gave rise to an interlude of American muscularity, both diplomatically and militarily — an interlude marked by a willingness to take the lead, a willingness to apply military force, and a willingness to sidestep or ignore the United Nations in doing so. That interlude was marked by the expansion of what Peter Beinart has accurately termed a “hubris bubble,” which grew during the late 1990s and in the early years of the 21st century.

The “hubris bubble” swelled when the Clinton administration bombed Iraq in 1998, to degrade the country’s suspected arsenal of weapons of mass destruction, swelled when the administration bombed Serbia in 1999, to force Milosevic to yield control of the province of Kosovo. It swelled when, following the deadly terrorist attacks of September 11, 2001, the United States invaded Afghanistan to topple the Taliban regime and dismantle the al-Qaeda network that carried out the attacks. It swelled still more in 2003, the United States led an invasion of Iraq to overthrow the regime of Saddam Hussein, which was suspected of stockpiling weapons of mass destruction.

(In Days of Fire, his book about the White House of George W. Bush, New York Times reporter Peter Baker anonymously quoted an official in the administration as saying: “The only reason we went into Iraq . . . is we were looking for somebody’s ass to kick. Afghanistan was too easy.”)

The “hubris bubble,” I write in 1995, finally “burst in the aftermath of the invasion of Iraq. After taking Baghdad and toppling Saddam’s Baathist regime, the United States was thoroughly unprepared for the grinding insurgency that followed.

“The puncturing of the ‘hubris bubble’ … led to a decided retrenchment. As if chastened, the United States in recent years has been far less inclined to apply force to diplomacy and far more content to lead from behind.”

Twenty years after Dayton, “muscular” is seldom invoked to describe U.S. diplomacy. The “American Exceptionalism” that embroidered the post-Dayton rhetoric of the Clinton administration has, I note, “fallen decidedly out of fashion among policymakers — a subject of wincing discomfiture and scorn, if seriously mentioned at all.”