Tomorrow marks the 20th anniversary of a partial shutdown of the U.S. government, the upshot of an impasse over spending cuts that pitted the Republican-controlled Congress and the administration of President Bill Clinton.

The shutdown was one of the more disruptive political events of 1995, furloughing as it did some 800,000 federal employes deemed “non-essential” as well as the closing the country’s 368 national parks, monuments, and recreation areas — including the Statue of Liberty, Independence Hall, Yosemite, and the National Zoo.

“Only Washington Would Try to Close the Grand Canyon,” the Washington Post observed at the time. That landmark, a national park since 1919, also was closed to visitors.

After five days, the Republicans and Clinton agreed to a shaky compromise that envisioned balancing the federal budget in seven years, and the shutdown ended.

But it turned out to be a prelude to a longer shutdown a month later — and as I discuss in my latest book, 1995: The Year the Future Began, the government closure of mid-November 1995 sowed even more stunning and lasting consequences.

The shutdown, I write, “made possible an otherwise impossible liaison, one that would explode twenty-six months later in an extraordinary scandal of sex and lies, a scandal that … would humble Clinton, imperil his presidency, and deepen partisan cleavages to such an extent that they never have fully closed.”

Because most White House staff was furloughed, unpaid interns stepped in to help keep the executive offices running. All of which enabled a 22-year-old White House intern named Monica Lewinsky to get close to Clinton. She was six-and-a-half years older than Clinton’s daughter and was assigned during the shutdown to answer phones in the office of the White House chief of staff, Leon Panetta. 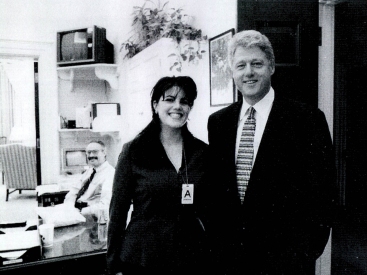 Down the hall was the Oval Office.

And during the evening of November 15, 1995, on the second day of the government closure, the 49-year-old president and the intern began a furtive dalliance.

They had seen each other several times during the day, carrying on what Lewinsky later called their “flirtation relationship.” At one point in the chief of staff’s inner office, Lewinsky lifted the back of her jacket, displaying the straps of her thong underwear. The risqué gesture “was over in an instant,” according to Lewinsky’s biographer, Andrew Morton, who noted that she “was rewarded with an appreciative look” from the president.

Later that evening, as she headed to a bathroom, Lewinsky passed the office of George Stephanopoulos. Clinton was in the office, alone, and beckoned the intern inside. At first, their conversation was awkward. Clinton asked her where she had gone to college. Lewinsky blurted, “I have a crush on you.” That was his cue, she said later, “to proceed … in what he wanted and what he was feeling.”

Clinton led her to his private office, behind the Oval Office. They spoke briefly and the president asked if he could kiss her. Without hesitation, she consented. Clinton’s kiss, she later told Morton, was “soft, deep, romantic.”

Before returning to her desk, Lewinsky handed Clinton a slip of paper on which she had written her name and telephone number. Later, when Lewinsky was alone in the chief of staff’s office, Clinton came in and invited her to see him.

RELATED: Clinton and the persistent shadow of scandal

They soon met in the windowless hallway connecting Stephanopoulos’s office to the Oval Office. They kissed and Lewinsky unbuttoned her jacket and the president’s hands wandered, fondling her breasts and genitalia. Soon, the telephone rang. Clinton took the call, keeping his hand in Lewinsky’s pants. She performed oral sex on him.

Ending the call, Clinton told her to stop. He said he needed to trust her before she brought him to a climax. She later told investigators that the president said, jokingly, that he “hadn’t had that in a long time.”

It was the first of what Lewinsky recalled in interviews with investigators as 10 sexual encounters with the president. Usually, she felated him and he fondled her, sometimes bringing her to orgasm. Their furtive encounters typically took place in the president’s private study near the Oval Office, or in the hallway or bathroom nearby — secluded places that granted them the most privacy.

As I note in 1995, sexual activity did not figure in every meeting between Lewinsky and the president. She told a federal grand jury investigating Clinton’s suspected misconduct:

“We enjoyed talking to each other and being with each other. We were very affectionate. We would tell jokes. We would talk about our childhoods; talk about current events. I was always giving him my stupid ideas about what I thought should be done in the administration, or different views on things.”

Clinton, she said, “always made me smile when I was with him. It was a lot of — he was sunshine.”

I also note in 1995 that it “was remarkable how much time the president devoted to Lewinsky, in person and on the phone.” Lewinsky estimated in all that she and Clinton spoke by phone about 50 times, usually late at night or early in the morning. During his campaign for reelection in 1996, Clinton sometimes called Lewinsky when his wife was not with him. In several calls that year, Clinton and Lewinsky engaged in phone sex.

The Clinton-Lewinsky liaison remained a secret until January 1998, when the president testified under oath at a six-hour deposition convened in a sexual harassment case against him. His accuser was Paula Jones, a former state employee in Arkansas who said Clinton had crudely propositioned her in 1991, when he was governor.

Jones’ lawyers asked Clinton about his liaison with Lewinsky. The lawyers had been tipped off by a friend of Lewinsky, Linda Tripp, and their questions rattled the president.

His denials set in motion an inquiry by Kenneth Starr, an independent counsel appointed in 1994 to investigate suspicions of misconduct by Clinton and his wife in a failed real estate investment in Arkansas. (The Clintons never were formally accused of wrongdoing in what was known as the Whitewater scandal, but their former business partners were convicted of fraud and conspiracy and sent to prison.)

Word soon leaked that Starr was investigating Clinton for suspected perjury and obstruction of justice in denying his affair with Lewinsky  — news, I write in 1995, “that electrified Washington as nothing had since the most dramatic revelations of the Watergate scandal in 1973 and 1974.”

In August 1998, Starr submitted an elaborately detailed, 445–page report, or referral, to Congress that identified 11 possible counts for impeaching Clinton. All of them arose from his dalliance with Lewinsky; none was related to Whitewater or related scandals.

In early December 1998, Clinton was impeached on separate counts of perjury and obstruction of justice — becoming the first elected U.S. president to be so charged. He stood trial in the Senate in early 1999 and was acquitted, as was widely expected.

The votes to impeach Clinton fell largely along party lines: Republicans were mostly in favor, Democrats were mostly opposed. And those votes, I write in 1995, “signaled a stark partisan divide that would deepen and intensify during the first fifteen years of the twenty-first century. … Sharp and predictable partisan disagreement on a variety of matters came to characterize the country’s riven political culture.”

It would be mistaken, of course, to attribute contemporary political polarization and cultural fragmentation exclusively to the storms provoked by the Clinton-Lewinsky scandal. But the impeachment battles of 1998–99 contributed mightily, representing an enduring consequence of the sexual dalliance enabled by the government shutdown 20 years ago.