‘Othering’ and the 1995 OKC bombing: Wiping away McVeigh?

The site of the deadliest domestic terror attack in American history nowadays is a meditative outdoor memorial featuring a reflecting pool guarded by loblolly pines, and 168 bronze-and-glass chairs (see nearby) commemorating each person killed 23 years ago in the bombing of the Alfred P. Murrah federal building in Oklahoma City.

Nowhere at the site is there specific reference to the terrorist, Timothy J. McVeigh, or where he parked a Ryder rental truck packed with explosives — fertilizer and a high-octane racing fuel, nitromethane, inside 55 gallon drums — that blew up the federal building on April 19, 1995.

Park Service rangers who give talks at the site typically don’t mention McVeigh, a disgruntled Amy veteran who thought he teaching the U.S. government a grievous lesson in attacking the Murrah building. Its occupants and visitors, McVeigh reckoned, were collateral damage in his vendetta against the government, which he held responsible for the fiery assault on the Branch Davidian compound near Waco, Texas, two years to the day before.

It’s odd that the scene of the McVeigh’s assault bears no mention of him, and I said so in discussing the Oklahoma City bombing and its consequences in my book, 1995: The Year the Future Began.

The site, I wrote, is “a soothing, well-manicured place that seems almost pastoral, an anomaly in a city. It is hard to believe that the parklike memorial was ground zero for an attack of deadly terror.”

I wrote that the array of chairs — known as the Field of Empty Chairs — “project a solemn and dignified ambiance, offering mute testimony to absence and irrecoverable loss. The outdoor memorial is a contemplative place, especially so at night when the base of each chair is softly illuminated.”

But I added that for “all its ingenuity and quiet appeal, the outdoor memorial is somehow anodyne. There are few obvious or specific references to the havoc and horror of the attack. … There is nothing explicit about the perfidy of the man who in his delusions dealt so much death and destruction at this site in 1995. The central figure in the 1995 bombing is neither demonized nor condemned — just improbably absent and ignored.”

It’s almost as if uttering his name or speaking about his role would somehow demean the site.

The studied efforts to ignore McVeigh were demonstrated anew during the hour-long remembrance program nine days ago at the outdoor memorial.

The only allusion to McVeigh and his two convicted accomplices (neither of whom was with him in Oklahoma City on April 19, 1995) was indirect, and came during a prayer read by a retired Oklahoma City police chaplain, Jack Poe.

“Twenty-three years ago our city experienced the unthinkable,” Poe intoned. “Men who were discontented with our nation, filled with rage and hate, bombed our city. Our response to their hate was to meet it with love. Love for our city, love for one another, and love for our neighbors. And love, as always, overcome[s] hate.”

Similarly, the designers of the outdoor memorial avoided mentioning McVeigh’s name in their narration of the video below, which runs almost 18 minutes and presents a virtual walking tour. They obliquely referred to the 1995 attack as a “tragedy” and as a “senseless act of violence” but refrained from saying who committed the attack or suggest why it happened.

The designers have said they intended the site to be a place for reflection. The focus is on surviving and recovering from unexpected violence, themes also emphasized at the annual remembrance programs in Oklahoma City on April 19. Which is understandable. But it means omitting something central: Not to mention McVeigh and his twisted objectives is to leave a historic site somehow incomplete.

(The nearby memorial museum does not ignore McVeigh, showing his mugshot, Glock handgun, and other artifacts. His getaway car, a battered 1977 Mercury Grand Marquis, is on display. The museum’s online site also offers a 58-minute-long video about McVeigh’s life.) 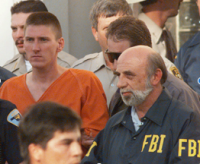 It’s curious as well that physical reminders of McVeigh’s plot have faded.

A research trip to the Midwest recently took me through central Kansas, where McVeigh and his principal co-conspirator, Terry Nichols, prepared the attack.

The Dreamland Motel, where McVeigh stayed before driving to Oklahoma City, was shuttered years ago and has been razed.

The teardown began on the bombing’s anniversary in 2011.

The Dreamland wasn’t much of a motel. It was hard by the interstate near Junction City, Kansas, and was at best of peripheral significance in the bombing saga. But it was closely associated with McVeigh, who was arrested in Oklahoma about 90 minutes after the bombing, later indicted, tried, and in 2001 executed for his crimes.

On the other side Junction City, a few miles away, is the former Elliott’s Body Shop, the auto repair place where McVeigh rented the Ryder truck.

It, too, has been shuttered. The owner in 1995, Eldon Elliott, sold the place years ago and the sturdy brick building now looks abandoned.

This certainly is not to say there should be public memorials to the mass killer of Oklahoma City. Not at all.

But to ignore McVeigh or to shy from mentioning his name when relevant to do so hints at a phenomenon that Kenneth Foote, head of the geography department at the University of Connecticut, has called the “‘othering‘ of violence.” That is, he wrote in a scholarly journal article in 2016, an inclination “to label or characterize the killing in ways that distance the killer from the community and have the effect of positioning the violence outside social norms.” (Emphasis added.)

That characterization of “othering” has resonance in the popular understanding of the Oklahoma City attack: Distancing “the killer from the community” may well be what is happening. Which is troubling, especially as officials in Oklahoma have been unsettled by the prospect that the bombing is slipping from the consciousness and understanding of a generation too young to remember the attack.

To treat central elements of the attack as unspeakable seems a sure way to aggravate that predicament.