It also was a year of conspicuous media failings and shortsightedness — deficiencies of the sort that are not at all unfamiliar 20 years later. 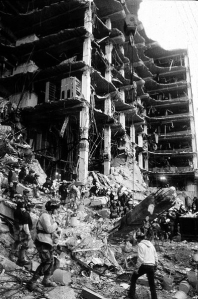 As I write in my new book, 1995: The Year the Future Began, which identifies and assesses the pivotal moments of a hinge year in recent American history:

“No industry in 1995 was as ill-prepared for the digital age, or more inclined to pooh-pooh the disruptive potential of the Internet and World Wide Web, than the news business. It suffered from what might be called ‘innovation blindness,'” the inability, or a disinclination, to anticipate and understand the consequences of emergent media technology.

Media failings are not a prominent theme in 1995, but they do represent a recurring and revealing subtext. They were well-described by Christopher Harper, a media columnist for the Washington Times, in a perceptive column published on New Year’s Day.

And it is a topic that may be discussed this afternoon, in the rollout of my 1995 book in a program at the Newseum, the museum of news in Washington, D.C.

As I point out in the book, some leading figures in American media “took comfort in the comparatively small audiences for online news in 1995.” Among them was Gene Roberts, then managing editor of the New York Times. In January 1995, Roberts told an Overseas Press Club luncheon in New York:

“The number of people in any given community, in percentage terms, who are willing to get their journalism interactively is — blessedly, I say as a print person — very slim and likely to be for some time.”

Roberts’ observation was reported by the trade journal Editor & Publisher which noted that his “views on electronic news transmission follow the widely held opinion of newspaper people that the Internet will never supplant their time-tested medium.”

Roberts was correct about the audience for online news — but only briefly. Just 4 percent of adult Americans went online for news at least once during the week in 1995; in five years, that percentage had climbed to 20 percent. And kept on climbing, shattering the smugness of traditional news media.

What many mid-size American newspapers found enthralling in 1995 was the fad known as “public” or “civic” journalism. This was a quasi-activist phenomenon in which newspapers presumed they could rouse a lethargic or indifferent public and serve as a focal point for rejuvenating civic culture.

As I point out in 1995, the wisdom of “public” journalism was vigorously debated by news organizations. But the debates were largely beside the point. “In a digital landscape, audiences could be both consumers and generators of news. They would not need news organizations to foster or promote civic engagement,” I write, adding:

“Whatever its merits, ‘public’ journalism suggested how far mainstream journalism had strayed from truly decisive questions in the field in 1995.”

The news media scarcely distinguished themselves in reporting the truck-bombing of the federal building in Oklahoma City on April 19, 1995. The attack was the deadliest act of domestic terrorism in U.S. history and killed 168 people, including 19 children.

In the hours immediately after the bombing, suspicions fell broadly if vaguely on Middle East terrorism. Speculation, as I write in 1995, “congealed with rumor into what seemed to be a plausible and urgent narrative” for the news media.

For example, Connie Chung, then in her final weeks as a CBS News anchor, declared in a special report from Oklahoma City hours after the bombing:

“This is the deadliest terror attack on U.S. soil ever. A U.S. government source has told CBS News that it has Middle East terrorism written all over it.”

Over on ABC News, the network’s national security correspondent, John McWethy, reported that “if you talk to intelligence sources and to law enforcement officials, they all say . . . that this particular bombing probably has roots in the Middle East.”

And on CNN earlier in the day, news anchor Frank Sesno said: “We have been told that a number of extremist Islamic groups have been traced to the Oklahoma area, and while there is no specific link yet [to the bombing], I’ve been told that they are among those who are being looked at very, very closely.”

The news media rode the angle of suspected Middle Eastern terror very hard — and were very wrong. It was a telling example of how early reports about a disaster or calamity can be in error or exaggerated, and as such deserve skeptical treatment. “It is,” I write in the book, “a vulnerability the news media seldom seem to anticipate, or to learn from.”

As it soon turned out, the attack was the work not of Middle East terrorists but of Timothy McVeigh, a disgruntled veteran of the U.S. Army who thought he would teach a meddlesome U.S. government a severe lesson by bombing the federal building. McVeigh was a white American. So, too, were his accomplices, Terry Nichols and Michael Fortier. 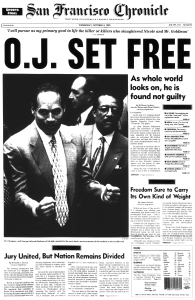 Acquittal in the ‘Godzilla of tabloid stories’

And then, of course, there was what James Willwerth of Time magazine called the “Godzilla of tabloid stories” — the O.J. Simpson double-murder trial, which stretched across much of 1995 like an indelible stain. The trial ended in early October with Simpson’s being found not guilty of killing his former wife, Nicole, and her friend, Ron Goldman.

Coverage of the trial was unrelenting, almost inescapable, and at times somewhat madcap — as when Larry King paid a visit to the Simpson courtroom in Los Angeles in January 1995. The Philadelphia Inquirer reported that King “bounded into court like an overheated Labrador retriever, drooling over the famous lawyers and waving to the audience as if he were the grand marshal at a parade.”

Howard Rosenberg, a media critic for the Los Angeles Times, wasn’t much exaggerating when he wrote in the trial’s aftermath:

“We in the media have met the circus, and we are it.”

Considerable debate about the coverage of the trial — invariably but probably excessively called the “Trial of Century” — revolved around the wisdom of allowing the proceedings to be televised. Doing so, it was said, encouraged the lawyers and witnesses to grandstand for the camera and had the effect of prolonging the trial.

The debate about cameras in the courtroom was fairly intense in 1995 but has since been settled, more or less, in favor of televising high-profile criminal trials.

Not that that necessarily has made for more sophisticated media coverage.