Much tedium, little drama in CNN rehash of Simpson trial

CNN billed its hour-long program last night about the O.J. Simpson murder trial as revisiting the “drama of the century.”

It was hardly that. It was a tedious show that offered little drama and added almost nothing to our understanding of what in 1995 was often called the “Trial of the Century.”

It was unclear what CNN intended to accomplish in its O.J. retrospective, beyond serving up a rehash roughly timed to coincide with the 20th anniversary of the start of the trial — a trial that spread like a stain across much of 1995. Opening statements began in late January and the proceedings in Los Angeles wore on until early October 1995, when Simpson was acquitted of charges that he murdered his former wife, Nicole, and her friend, Ronald Goldman.

Easily the  program’s most revealing line was the observation by Alan Dershowitz, the Harvard University law professor

who was one of Simpson’s several lawyers. There were many — Johnnie Cochran, Robert Shapiro, and F. Lee Bailey among them — and news organizations in 1995 frequently referred to the defense lawyers as a “Dream Team” of legal talent.

Not so, Dershowitz asserted during the CNN program. Rather, he said, “it was a nightmare team” riven by backbiting and clashing egos.

CNN might well have pursued the intriguing and perhaps even dramatic angle as to how Simpson’s defense team overcame internal rivalries to secure acquittals in the case. How was that accomplished? Did the “dream team/nightmare team” ultimately win in spite of itself? Did it win because of the prosecution’s not-infrequent bumbling? 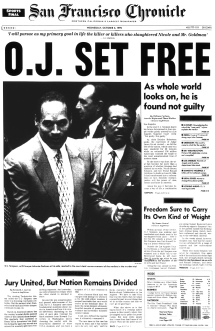 An even richer and more appealing line of inquiry would have been to address the enduring effects of the Simpson case, to explore why and how it still matters, 20 years on. Such an analysis would have been a reason to watch the show.

As I note in my new book, 1995: The Year the Future Began, the Simpson case really exerted “little lasting influence on American jurisprudence.”

Its “most significant contributions,” I write, were in forensic DNA analysis, in introducing “the promise and benefits of genetic evidence to mainstream American culture. Through the Simpson case, the American public gained a measure of familiarity with forensic DNA testing that was to deepen in the years after 1995.”

That contribution was a crucial point that CNN failed to make.

Moreover, the case “anticipated and perhaps stimulated broad popular interest in DNA and its seemingly wondrous capabilities,” I write in 1995. “Prime-time television series such as CSI: Crime Scene Investigation and its spinoffs draw on techniques of DNA collection and testing and have elevated the work to a dramatic and decisive level.”

That contribution likewise was left unexamined.

So, too, was the Simpson trial’s enduring and unmatched status among high-profile murder cases. As I point out in 1995, the Simpson’s remains “a standard against which other sensational murder cases are measured and invariably found wanting. No murder trial in the United States since 1995 has matched the Simpson saga for mania, duration, infamy, and unrelenting media attention.”

16 comments on “Much tedium, little drama in CNN rehash of Simpson trial”