It’s certainly commendable that the 1990s — a decade Americans too often treat casually or dismissively — is receiving extended attention from CNN, in a seven-part documentary series that premieres tonight.

Talk about trivializing a 10-year span that brought the collapse of communism, the rise of the Internet, and the repeated shocks of terrorist attacks in the United States. Not to mention the first-ever impeachment of an elected U.S. president.

True, some of the most popular television shows of the ’90s — including sitcoms like Seinfeld and Friends — were inspired. Even now, their re-runs attract sizable audiences. But what did they, and the host of other shows that CNN touches on in a prolonged, series-opening nostalgia trip, reveal about the decade?

What’s the message? That it was a time of edginess and risk-taking in popular entertainment? It was a time when diversity of gender, race, and sexual orientation was first explored, and celebrated, on TV?

CNN’s show suggests as much, but offers no interpretation about what television of the time told us more broadly about the ’90s.

The show does offer a rather tentative claim that broadcast news became more sensationalized during the decade, as signaled by the months-long double-murder trial of celebrity and former football star O.J. Simpson.

He was accused, but acquitted, of viciously stabbing to death his former wife, Nicole, and her friend, Ronald L. Goldman, in 1994 outside her townhouse in a fashionable section of west Los Angeles.

His trial in 1995 was sensational. But not because its was televised live.

As I discuss in my book, 1995: The Year the Future Began, the Simpson case “embraced those rare and salient features that make for an exceptionally high-profile trial: The defendant was well-known and well-liked, at least before the trial. The crimes were appalling and the victims were especially vulnerable [in what was surprise knife attack]; they had had little chance to defend themselves from their killer. Hot-button social issues, such as domestic abuse, police misconduct, and race relations, crowded into the case.

“No less important was multimillion dollar wealth, which enabled Simpson to recruit a high-powered legal team that went toe-to-toe with prosecutors for months, and usually got the better of them.” 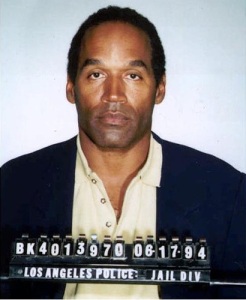 Tonight’s two-hour debut installment is to be followed in a week’s time by a hour-long episode about Bill Clinton, whose turbulent, two-term presidency defined the politics of the decade.

Subsequent episodes are devoted to U.S. racial turmoil of the ’90s, the paradigm-shattering political change abroad, domestic U.S. terrorism, the emergence of the Internet, and the rich variety of popular music that marked the decade.

A more intuitive starting point would have been the collapse of the Soviet Union in 1991, which left the United States standing alone as the undeniable victor of the prolonged Cold War, followed by the Clinton and the terrorism installments, and then by the episodes on race, music, television, and the Internet.

Closing with the Internet would have allowed a series wrap-up with the Y2K phenomenon, which centered around fears of worldwide computer disruptions on January 1, 2000. The angst was borne by suspicions that computers would mistake 1.1.00 for January 1, 1900.

But the fears proved largely misplaced.

The ’90s series offers more to critique than its puzzling sequencing and messaging.

The Clinton installment is rather a jumble, offering few clues (other than the suspect motives of his foes) about what enabled Clinton to bounce back as often as he did, to slip the clutches of scandal and emerge with popularity well intact.

That’s what happened in Clinton’s sex-and-lies scandal with Monica Lewinsky, a White House intern 27 years his junior with whom he carried on an intermittent affair at the White House from 1995-97.

Clinton’s dalliance led in 1998 to his impeachment on charges of perjury and obstruction of justice. He was acquitted in early 1999 at trial by the U.S. Senate. 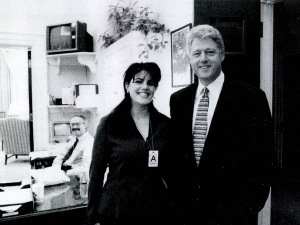 CNN’s program fails to mention the penalties beyond impeachment that Clinton paid for his mendacity in the Lewinsky case.

There is no mention of Clinton’s being found in contempt (an unprecedented penalty imposed on a sitting president) by the federal judge who presided at the deposition Clinton gave in January 1998 in a sexual harassment lawsuit. No mention of Clinton’s grudging and belated acknowledgement of having given false testimony at the deposition in 1998, no mention of his surrendering for five years his license to practice law in Arkansas, his home state.

The episode presents few voices critical of Clinton and his presidency. No critic like Charles Krauthammer makes an appearance among the experts and talking heads the producers recruited.

Krauthammer is a conservative who has — wrongly in my view — dismissed the ’90s as a “holiday from history” — largely because, as he has argued:

“Every major challenge to America was deferred. Chief aim of the Clinton administration was to make sure nothing terrible happened on its watch. Accordingly, every can was kicked down the road,” including those of Islamic terrorism and North Korea’s nuclear weapons program.

Commentary of that kind would have injected energy and dispute into an analytically light look back at what was an exceptional decade.