A 7,000 pound bomb, made of ammonium nitrate and fuel oil and packed in the cargo hold of a rented Ryder truck, blew up outside the Alfred P. Murrah federal building in Oklahoma City. The blast was so powerful that it was heard or felt for miles; at ground zero, the bomb tore into the North facade of the federal building, collapsing floors and carving out a debris-filled crater 8 feet deep.

In all, 168 people were killed, including 19 children, in what remains the deadliest attack of home-grown terrorism in American history. 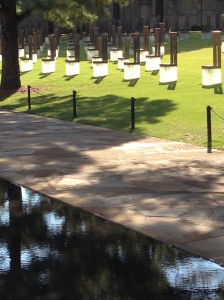 The 22nd anniversary of the attack will be commemorated tomorrow in Oklahoma City as it has been for years — in a ceremony etched in deep sorrow, during which survivors and relatives of victims read the names of the men, women, and children who died in the attack. The ceremony will be at the site of the bombing, now an open-air memorial called the Field of Empty Chairs (see right), or at a church nearby.

Grief and sorrow remain palpable in Oklahoma City where, it is said, the passing of years is measured by two dates: On January 1, at the start of the calendar year, and on April 19, at the anniversary of the Murrah building bombing.

The approaching anniversary presents an occasion to consider a couple of enduring lessons about the bombing: How early news reports about major events and disasters almost always are in error in important ways, and how prominent terrorist attacks are not necessarily the consequence of broad and intricate conspiracies.

Both phenomena were associated with the Oklahoma City bombing.

As I discuss in my book, 1995: The Year the Future Began, the prevailing assumption that arose in the bombing’s immediate aftermath was that Middle Eastern terrorists had blown up the Murrah building.

Connie Chung, then in her last days as co-anchor of CBS Evening News, went on the air the night of the attack to declare:

“This is the deadliest terror attack on U.S. soil ever. A U.S. government source has told CBS News that it has Middle East terrorism written all over it.”

Over on ABC News, John McWethy, the network’s national security correspondent, reported that “if you talk to intelligence sources and to law enforcement officials, they all say . . . that this particular bombing probably has roots in the Middle East.”

In a commentary published two days after the bombing, syndicated columnist Georgie Anne Geyer wrote that “the indisputable fact is that it has every single earmark of the Islamic car-bombers of the Middle East.”

It was disputable soon enough: Hours after Geyer’s column was in print, federal authorities took into custody a lanky, white American named Timothy McVeigh, a disgruntled Army veteran who was the prime mover in the attack.

McVeigh, with help from a former Army buddy named Terry Nichols, obtained the bomb components and rented the Ryder truck into which he and Nichols built the device, near a lake in rural Kansas.

McVeigh, then 26, drove the truck-bomb from Kansas to a curb cut outside the Murrah Building, locked the cab as fuses burned to the cargo hold, and hurried to a getaway car. He was arrested about 90 minutes later, north of Oklahoma City, on a traffic stop, and held at a county jail until federal authorities linked him to the bombing two days later.

As I write in 1995, American news media rode the Middle East-terrorist angle very hard “and they were wrong, a telling example of how news reports in the first hours and days after a disaster can be terribly misleading.

“It is a vulnerability the news media seldom seem to anticipate, or learn from.”

Indeed, the news media have tended to make similarly embarrassing errors in subsequent reporting of major events: Misreporting the 2013 Boston Marathon bombing is a more recent example of this recurring but little-examined phenomenon. There seems little urgency in U.S. newsrooms to confront what has become a rather predictable problem.

Competitive factors may help explain the misreporting. Reliance on anonymous sources — a temptation and a hazard for the news media — almost certainly does, too.

At Oklahoma City in 1995, visual reminders may have been a factor as well: The devastated facade of the Murrah Building looked much like the U.S. embassy building in Beirut after it was bombed in April 1983.

Linking McVeigh and Nichols to the bombing shifted the narrative for the news media — away from Middle East-terrorism and to suspicions about the inchoate militia movement that had popped up in rural America in the 1980s and 1990s.

“The arrest of McVeigh and reports that he nursed grudges against the federal government opened a fresh vein of speculation in the news media,” I write in 1995, noting that the New York Times reported four days after the bombing:

“Federal investigators said they believed there was a broader plot behind the bombing and were searching for evidence of a conspiracy hatched by several self-styled militiamen who oppose gun laws, income taxes and other forms of government control.”

Such suspicions have proven fairly resilient — they were pushed adamantly but unpersuasively in a recent PBS documentary, for example. But while McVeigh “harbored extreme, anti-government views, he never was conclusively linked to anti-government militias. He certainly was neither a leader of, nor an activist in, such extremist groups,” I note in 1995.

Moreover, Dan Herbeck, one of McVeigh’s biographers, asserted during the closing portion of the PBS documentary:

“Tim McVeigh didn’t actually belong to a militia group. But he certainly had the same opinions about the government that many of the militia groups had.”

The notion the Times touted of “a broader plot behind the bombing” came a cropper.

So, too, have other claims that McVeigh was but a cog in a much wider conspiracy — including a fanciful notion advanced by his court-appointed defense lawyer, Stephen Jones, who spent much time and money investigating an extravagant theory that bombing was the work a vast and shadowy international conspiracy.

In a book titled Others Unknown, Jones claimed the conspiracy stretched “weblike, from America’s heartland to the nation’s capital, the Far East, Europe, and the Middle East, and much of it remains a mystery.”

Jones “speculated profusely,” I write in 1995, “and invoked the likes of [Ramzi Ahmed Yousef, who organized the 1993 attack on the World Trade Center] and even Osama bin-Laden to infer that a vast international plot loomed behind the Oklahoma City bombing.

“But it was mostly disjointed conjecture — vaguely suggestive but unpersuasive.” 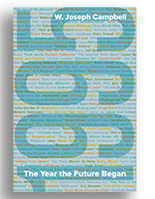 “The passage of time, moreover, imposes stern tests on theories of vast, far-flung conspiracies like the one Jones proposed. Such plots, given their complexity, are exceedingly difficult to keep intact for extended periods. Mistakes and missteps are inevitable; conspirators can fall prone to disputes and rivalries. Incentives to explode the conspiracy from within can be many.

“The prominence of the criminal act — the bombing at Oklahoma City was, and remains, the worst act of domestic terror in U.S. history — attracts ceaseless interest and attention, adding to pressures on the conspirators. As time passes, a vast, far-flung plot becomes increasingly difficult to sustain and conceal.”

That no powerful or plausible evidence of widespread conspiracy has emerged since 1995, I write, “argues powerfully against the notion of a vast international plot in the Oklahoma City bombing.”

A broad plot probably never existed Oklahoma City attack, I write, adding that the most compelling evidence indicates that “McVeigh was the remorseless ringleader. Nichols was his primary accomplice.” Another Army buddy, Michael Fortier, knew about plans to bomb the Murrah building but did nothing to thwart the attack.

The conspiracy may have been narrow and ragtag, But given McVeigh’s dominant personality, know-how, and perverse vision, it was just cohesive enough. And terribly lethal.

5 comments on “Timeless lessons of the 1995 Oklahoma City bombing”