Twenty-three years ago this month, in the watershed year 1995, Bob Packwood resigned from the U.S. Senate in an abrupt but calculated move to head off certain expulsion for serial sexual harassment and official misconduct.

On the day Packwood announced his resignation, September 7, 1995, a succession of senators took the floor to pay tribute to the Oregon Republican, a 27-year incumbent, and to say how much they would miss his presence. 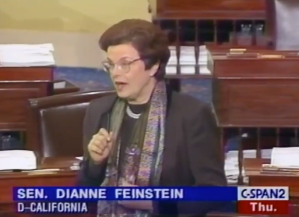 Among them was Dianne Feinstein of California, who, as the New York Times reported the next day, “unexpectedly delivered a gracious tribute to Mr. Packwood, whom she said she hardly knew.”

Feinstein praised Packwood’s “courage and bravery” but did not refer specifically to the allegations of sexual and official misconduct. In fact, she noted that “the heads of various women’s organizations have indicated their respect for him and for his long record of help.”

The ’95 case against lecherous Bob Packwood, whom Biden praised

Feinstein’s remarks that day in 1995 have contemporary resonance, given that she is at the center of a political maelstrom swirling around uncorroborated allegations that U.S. Supreme Court nominee Brett M. Kavanaugh committed a sexual assault 35 or 36 years ago, when he was in high school.

Kavanaugh has vigorously denied the allegations.

Feinstein had been informed about the alleged assault in July but did not bring up the matter with Kavanaugh, with whom she met face-to-face in private; nor did she mention the matter to colleagues on the Senate Judiciary committee until after the panel had completed its hearing about Kavanaugh.

The liberal Feinstein’s reticence has been criticized as an attempt to delay or sidetrack Kavanaugh’s nomination. Feinstein’s hometown newspaper, the San Francisco Chronicle rebuked her, saying she “took the worst possible course by waiting until almost a week after Kavanaugh’s confirmation hearing was completed to ominously announce that she had turned over ‘information from an individual’ about Kavanaugh to the FBI, and adding that she would be honoring the woman’s ‘strongly requested’ confidentiality.”

The Chronicle’s editorial further stated: “Feinstein has been around Washington long enough to know that her opaque statement guaranteed that the contents of the letter, sent by a Stanford law professor on behalf of the accuser, would be pursued and publicized in short order. And they were.”

Feinstein’s conduct in the Kavanaugh case stands in contrast to her charitable comments in September 1995 about Packwood, who faced numerous and well-documented allegations of unwanted sexual advances on women, many of whom were dependent on him for their jobs. Packwood’s expulsion was the unanimous recommendation of the Senate Ethics Committee, which had investigated his suspected offenses for months and found them many and sordid.

As I wrote in my book 1995: The Year the Future Began, the ethics panel’s findings “etched a devastating portrait of Packwood, accusing him of attempting ‘to obstruct and impede’ the committee’s inquiry ‘by withholding, altering and destroying relevant evidence’ including portions of his audiotaped diary in which he discussed his sexual overtures and conquests.

“The senator also pressured lobbyists to pay consulting fees or retainers to his estranged wife, as way to reduce his financial obligations to her, the ethics committee found. The report also identified eighteen separate encounters which took place from 1969 to 1990, in which Packwood had made ‘unwanted and unwelcome sexual advances’ on women. It represented, the committee said ‘a pattern of abuse of his position of power and authority.’ Packwood’s targets, the ethics committee said, ‘were effectively powerless to protest in the face of his position as a United States Senator.'”

After vowing to fight the charges against him, Packwood told the Senate in a mawkish and rambling speech that he was quitting. The announcement precipitated the series of tributes from fellow senators, including Feinstein, who, as I note in 1995, “had been an early voice calling for his resignation.”

Her tribute to Packwood lasted nearly 2½ minutes and may be seen in its entirety in this C-SPAN video, from time stop 55:36.

“I did not know Senator Packwood well,” Feinstein said, “but I have watched him. I heard him on CNN last evening, I heard him on other shows. … I’ve listened as the heads of various women’s organizations have indicated their respect for him and for his long record of help. And I recognize that service in this institution is not easy, that people are held to a standard and, after all, we are just mirror reflections of everyone around us. We are complete with moles and warts and our own problems.

“And I really think that kind of performance goes beyond any party label. And it goes beyond any trial and tribulation. My father used to always say to me, ‘Dianne, don’t let a man be known for the last thing he does. Let him be known for the best thing he does.’ And I think that is the legacy that, hopefully, is being written here this afternoon.

“This is a sad day in a chapter of history of the United States Senate. But it says one thing: We do have our failings, and we do make our mistakes. But it is the sign of a wise man, and even a giant man, who stands and does what has to be done, and goes on to fight another day.

“I thank you Senator Packwood for long and distinguished service to the United States Senate.”

According to accounts published the next day in the Chronicle and the New York Times, Packwood was so moved by Feinstein’s generous tribute that he crossed the floor to take her hand. And he wept.

This entry was posted on September 22, 2018 by W. Joseph Campbell in Scandal, Senate, Watershed year and tagged 1995, Recent past, scandal, Watershed year.