Monica Lewinsky’s widely noted speech yesterday to the Forbes Under 30 program in Philadelphia was notable for what it left out: She made almost no mention of former President Bill Clinton, with whom she had an intermittent sexual affair, beginning in 1995 when she was a White House intern. 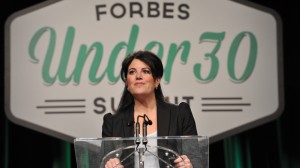 Instead, Lewinsky, who is now 41, criticized “a politically motivated” independent counsel, Kenneth Starr, whose investigation of the Clinton-Lewinsky scandal led to Clinton’s impeachment in December 1998. Lewinsky criticized “a so-called friend,” Linda Tripp, who secretly tape-recorded more than 20 hours of private conversations with Lewinsky and eventually turned them over to Starr’s investigators. Lewinsky criticized the Drudge Report, which was first to report that Clinton had had an affair with Lewinsky.

But about her relationship with Clinton, Lewinsky spoke with what seemed to be a hint of longing. She said she regretted it now but added that “at that time, it was my everything. That, I guess you could say, was the golden bubble part for me; the nice part. The nasty part was that it became public. Public with a vengeance.”

My soon-to-be-published book, 1995: The Year the Future Began, includes a chapter about the Clinton-Lewinsky affair, noting that it began during the partial shutdown of the federal government in November 1995 — an exceptional circumstance that caused the furlough of most White House staffers and allowed Lewinsky access to the president she otherwise would not have had.

That chapter in 1995 also recalls how news of Starr’s investigation of Clinton for perjury and obstruction of justice in his dalliance with Lewinsky electrified Washington, D.C., “as nothing had since the most dramatic revelations of the Watergate scandal in 1973 and 1974.”

What drove the scandal was not the Internet, not the Drudge Report but Clinton’s mendacity, beginning with his deposition in January 1998 in a sexual harassment case brought by Paula Jones, a former state employee in Arkansas who alleged that Clinton had propositioned her while he was governor.

Clinton perjured himself several times during the deposition, denying under oath that he had a sexual affair, denying that he had ever been alone with Lewinsky.

Clinton renewed his lies in August 1998, during testimony before a federal grand jury empaneled by Starr, and renewed them in responding to questions submitted by the House Judiciary Committee.

Had he been tried for crimes arising from the sex-and-lies scandal, Clinton might have faced a prison sentence of thirty to thirty-seven months, Judge Richard Posner wrote in his 1999 book, An Affair of State: The Investigation, Impeachment, and Trial of President Clinton.

In addition to obstruction of justice and perjury, Posner wrote, “An imaginative prosecutor could no doubt add counts of wire fraud, criminal contempt, the making of false statements to the government, and aiding and abetting a crime.”

None of that was even hinted at in Lewinsky’s speech yesterday. The omission was odd, and represented a huge gap.

It is difficult to regard Lewinsky as a victim primarily of Internet attacks or of posts at the Drudge Report. It’s hard to accept her description as having been the “first person to have their reputation completely destroyed worldwide via the Internet,” as if the Internet were the culprit.

The real cause was her entanglement with Clinton and his dishonest yet ultimately successful efforts to turn back impeachment and preserve himself in office.

27 comments on “The big gap in Monica Lewinsky’s speech”